Curie: Capturing New Users at the Point of Discovery

Curie is the natural body care brand creating clean formulas, from deodorants to hand sanitizers, that are just as effective as their chemical-ridden counterparts on the market.

Since 2018, they’ve expanded from their flagship aluminum-free deodorant to a full product line, which can be found online and in Nordstrom, Bloomingdale’s, and Anthropologie.

We sat down with Curie Founder and CEO Sarah Moret to dive into:

“We were striving to remove all friction from the purchasing experience — that’s the biggest thing Batch solves.”

The Early Days: Struggling to Bridge Offline and Online

As Sarah explains, she first conceptualized Curie when, prior to COVID, she frequented several fitness classes throughout LA. More specifically, she found studios like SoulCycle and Equinox would curate high-end amenities for their members, carrying brands like Le Labo and Kiehl’s.

However, every pricey fitness center was somehow still carrying heavily chemical deodorants found at your local drugstore, like Dove and Degree. So the earliest idea of Curie came to be: an effective, aluminum-free antiperspirant that’d collaborate with studios as marketing partners.

The Curie team began piloting pre-COVID — and before QR codes had become ubiquitous.

However, the Curie team quickly ran into what Sarah now calls their greatest pain point: struggling to find a feasible way to actualize a frictionless purchase experience, which would then seamlessly convert offline users in these fitness spaces into online buyers.

Integrate Batch into your brand

Learn how Batch can help drive revenue and engagement

They eventually spun up two more attempts to actualize their conversion opportunity: selling Curie at studio entrances, where users could purchase and grab products on their way out.

However, despite pushing forward on new campaigns, studios:

Curie also attempted to roll out text-to-order flows, where they put up signage during their pre-COVID pilot and instructed folks to text a number for an order link. It would keep Curie present in the user’s messages or inbox, yet still carried the friction of the checkout process.

“We struggled to effectively convert people because of how unique the user situation was. This is where Batch comes in.”

The QR Solution They’d Been Waiting For

It was roughly a year or so into the pandemic, as QR codes had become common practice when Curie began integrating them into their funnel. After all, according to Sarah, they knew the user interest and potential for conversions existed from their pilot programs.

They only needed the tech to facilitate the bridge from offline interest to online purchase.

In the meantime, they planned to make do with regular QR codes that’d link to the Curie website.

Then, right before the brand was due to launch a partnership with SoulCycle, Sarah was introduced to the Batch team. As she recounts the intro and onboarding experience:

“Our Batch Tags were up in SoulCycle studios within a week of onboarding. It wouldn’t have worked if the Batch team couldn’t move fast.”

Overall, Sarah summarizes Batch’s impact on her brand as threefold.

With Batch’s core product, Curie has manifested what she conceptualized years ago: effectively converting offline testers, from their partnerships with fitness studios, into online customers.

By removing all friction between in-person discovery and digital checkout, she describes having Batch QR codes on Curie products in studios as pure revenue conversion. 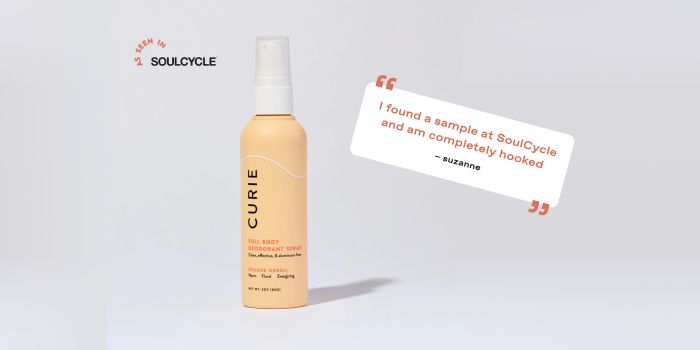 By placing QR codes on all Curie packaging, they’ve also applied frictionless purchases to the user flow for reordering. It’s a much-needed lift, seeing as their products are replenishable CPGs.

Diving deeper into this point, Sarah went as far as predicting that 100% of scans of packaging QR codes will be from repeat purchases for a few reasons:

Now, as Sarah explains, Batch helped Curie make it as simple as possible for users to reorder the exact products that they need at exactly the right time they need them.

Finally, Sarah points to Batch’s functionality for creating QR codes that can direct users to more than just one select product. For instance, Curie users have shown an overwhelmingly positive reaction, as Sarah puts it, toward the brand’s unique scents and fragrances.

As such, a buyer who might scan their package’s QR code to reorder their deodorant spray in the White Tea SKU can also receive suggestions to add a White Tea body oil or candle.

As she explains, this has been critical for the brand’s focus on consistently driving AOVs because — while subscribers drive great value in terms of reliable revenue — having users reorder the same product every few months does not maximize their potential LTV.

Thus, Sarah would ultimately emphasize the versatility of Batch’s frictionless purchase flow for use cases that run the full consumer life cycle, from:

“We’re so confident that, with Batch, our live products and their QR codes will be able to convert and see generous returns.”

Ready to get started?