NoonBrew is a San Francisco-based beverage brand offering a tea blend designed to re-energize people in the afternoon. With a mix of 19 superfoods, mushrooms, and adaptogens, the product provides a crash-free alternative to your typical 2 PM coffee or over-caffeinated energy drink.

We sat down with Andrew Case and Allan Shen, co-founders of NoonBrew, to dive deep on:

“Anything related to packaging or merchandise, Batch is the perfect avenue for it. It’s so frictionless that you can pull the QR code up and tap two buttons to order.”

Andrew first came up with the idea for NoonBrew while stuck in a daily routine of 9 to 5 Zoom meetings at the peak of the pandemic. He was drained by the time late lunch came around and, after asking around friends and family, discovered it was a surprisingly common pain point.

However, nobody had a go-to product the same way coffee was a given in the morning.

Andrew took the idea to his friend and now co-founder Allan Shen, who brought a deep background in traditional Chinese medicines due to his family’s history in the field.

Allan wound up developing early formulations of NoonBrew while Andrew carried out the company’s sales and marketing efforts, including:

“Despite only being in-market for less than a year, we’ve seen real growth due to our genuine product differentiation.”

Why NoonBrew Onboarded with Batch

The first was product ubiquity. By the time they'd encountered Batch, QR codes had become widely accepted by American users due to the pandemic, for purposes from menu browsing at restaurants to touchless payments.

The second was revenue. Despite early success in acquisitions, both organic and paid, the NoonBrew team found themselves frequently seeking new ways to drive overall sales — and thus repeatedly asking how they could secure stable repeat purchases.

They first discovered Batch as a conversion method through Nik Sharma — but what cemented their interest was when he found Batch Tags being used in real time at an industry event.

He brought his findings back to Allan and the pair quickly realized, in their words, that Batch was a no-brainer for the solution they'd been seeking to drive even greater conversions. 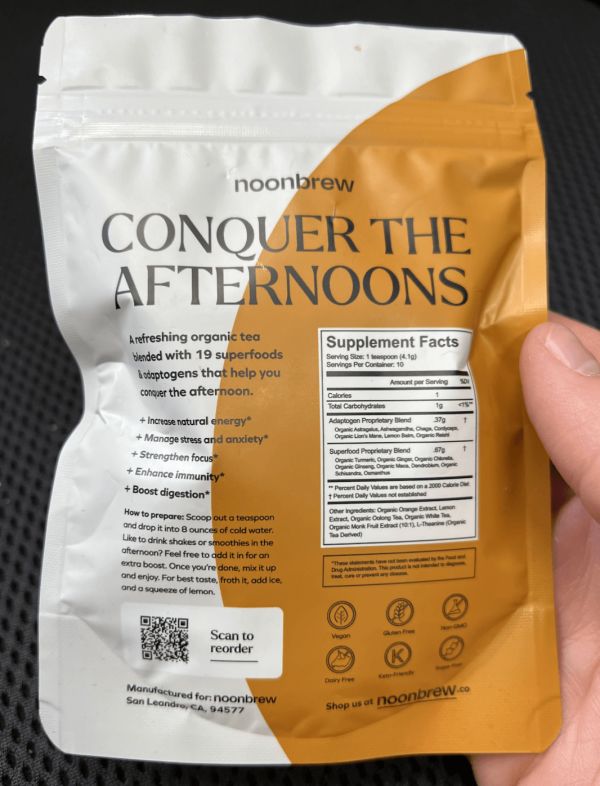 As for the team’s technical onboarding with Batch, Andrew summarizes the quick timeline and turnaround as easy from end to end. Following their discovery of Batch at an event, Andrew and Allan reached out through the platform’s website and hopped on a sales call.

They ordered their Batch Tags to accompany the first 10,000 or so pouches for NoonBrew’s hard launch. Then, Batch provided their QR codes within 24 hours.

Finally, NoonBrew sent the codes to their designer and had them placed and printed on their packaging and coasters without a snag.

“Onboarding with Batch was insanely easy. We decided it was a no-brainer and turns out, it’s been a great channel for us in terms of user acquisition.”

Andrew describes the placement of a Batch Tag on the back of each NoonBrew package, as well as each NoonBrew coaster (where a user puts their drink every afternoon), as incredibly natural for encouraging repurchases.

Each NoonBrew code also reads "Scan for a secret offer," unlocking discounts for both repeat buyers and first-timers who've discovered NoonBrew through a code.

Batch also provides email templates for user education that works with leading email providers like Klaviyo. Through this channel, NoonBrew leverages dynamic email displays, so a buyer who hasn't reordered in 21+ days will receive a campaign with instructions on how to easily re-up their NoonBrew supply through a QR code that's already in their hands.

Like an abandoned cart reminder, any user who scans a NoonBrew code and exits before purchasing receives a follow-up push notification from Batch 1 hour later, a feature made available because Batch is built on iOS App Clip technology.

As Andrew tells it, friends and users have reached out about their surprise at receiving an app notification to buy some NoonBrew — and then gone through with purchasing.

“We don’t make a ton of profit on first-time buyers. So we have to drive second and third re-orders. Batch is the most effective way to achieve that outcome.”

Since implementing Batch Tags, NoonBrew has acquired waves of first-time buyers in both standard and unexpected ways. For instance, a buyer might invite friends to their home, wind up mentioning NoonBrew, and then help those friends place an order to try it through their QR code.

In those situations, the brand has instantly gained a first-time consumer through a combination of word of mouth for a trustworthy product and the simplicity of the Batch codes paired with the low-effort checkout process they facilitate.

Andrew considers reordering rates to be the top metric improvement driven by Batch.

Across NoonBrew's Shopify dashboard, the team has been able to track increasing return customer rates across the months.

While a majority of NoonBrew's customers are subscribers, as Andrew explains, a large portion want to try a one-off package and then end up re-ordering through Batch.

Batch thus becomes the perfect tool for encouraging them to place repeat orders instead.

Andrew adds that when he sees orders come in off of Batch Tags and realizes that customers are ordering from their homes in a moment where they are actively enjoying your product, it's incredibly rewarding and a great feeling for the whole Noonbrew team.

After all, it's truly a motivator and a source of confidence to see users love — and subsequently, reorder — what you produce. Put simply, it's a quick win as well as a rapid feedback cycle that provides clear data on what's working, within a short period after deploying something.

“I don’t know why anyone would turn down a way for users to seamlessly reorder your product. It just makes sense — the ROI of Batch is immediate.”